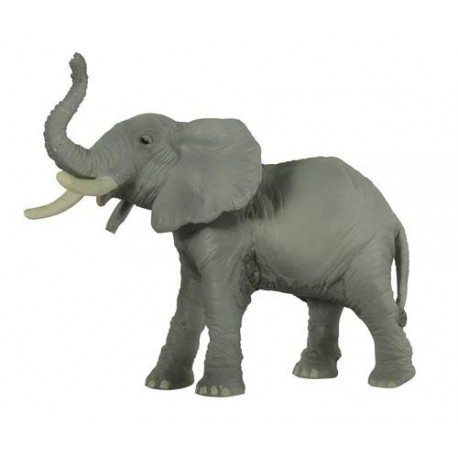 Did you know that the sound an elephant makes is called trumpeting?
The African elephant is the world's largest land mammal! As you would expect, it is the king of the animal kingdom out on the African grasslands. What characterises it is doubtless its enormous trunk, its large ears which it uses to cool itself down and its huge tusks. The trunk is actually an extension of the elephants lip and nose, enabling it to communicate, to bring water and food to its mouth, to pull and carry branches and to make sounds. Its tusks are made of ivory and enamel and are actually two teeth which are used as a tool and as a means of defence during combat. The elephant lives in a herd of around 20 individuals and spend most of its time looking for food. It mainly eats leaves and branches from bushes or trees, fruit or bark. As an age-old symbol of wisdom, it is also well known for its intelligence and its memory, hence the expression "to have a memory like an elephant".