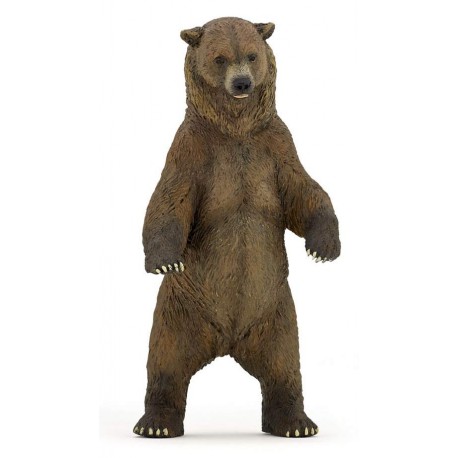 Item not in stock

Standing upright on its two back legs, the grizzly bear looks even more frightening. It can measure up to 2.7 m and is one of the most powerful land animals in the world. This posture earned it the nickname given to it by the American Indians: the brother of man.
Originating from North America, this mammal is the largest of its species after the polar bear. Its dark brown coat includes touches of white, brown and black but it is the grey tips of its fur which have earned it its name (in English grizzled means going grey). This omnivore lives alone and chiefly eats vegetables (berries, roots, etc.). Nevertheless, it sometimes also eats fish, ants, bees and young mammals such as wapitis. To survive through the winter, the grizzly bear eats large amounts of food during the summer before heading for its den to hibernate from November to March.