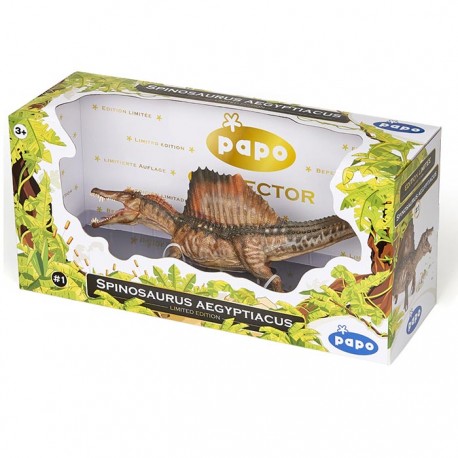 Sold in multiples of 2

This extraordinary dinosaur lived 110 to 97 millions years ago in what is now North Africa. The Aegyptiacus Spinosaurus is the largest known theropod to date, it’s also the largest terrestrial carnivore recorded! The Aegyptiacus Spinosaurus was able to adapt to a semi-aquatic lifestyle since they could combine fishing and hunting for food. It’s physique, close to that of a crocodile is particularly stocky. Aegyptiacus Spinosaurus measured between 16 and 18 meters for a weight of 11 tons. The very dense bones of it’s lover limbs prevented it from floating and allowed it to straighten up in the water. It used the upper part of its boddy to hunt its prey. The mystery surrounding their very large backbone is still in debate, and it continues to divide scientists around the world. Up to 160 cm in height, Aegipticus Spinosaurus was covered with a veil of skin which, some believe acted as a thermal regulator, while others believe that it supported a large muscular hump, similar to what we observe in Bison.